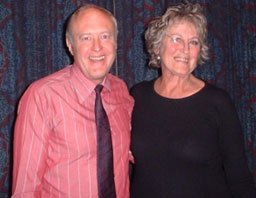 The former Chairman of CPRE Cambridgeshire, Mike Bratby, has died at the age of 77.

Born and educated in Norwich, the retired Wing Commander devoted eight and a half of his retirement years to campaigning for countryside issues in Cambridgeshire and Peterborough.  During his RAF career, he was posted to several RAF bases in the Eastern counties. When he retired in 2000, he and his wife chose to move back to the house they had bought in Cambridgeshire eighteen years previously.

Mike’s lifelong interest in aviation was sparked by growing up near the East Anglian military airfields.  During his undergraduate years studying History at Bristol, he signed up to the University Air Squadron. This proved to be the start of a long and distinguished career in RAF Logistics, specialising in fuels, which took him to the rank of Wing Commander.

His wife Anna was a fellow student at Bristol. They married in 1971 and their son James was born nine years later.  After many postings, which took the family as far afield as Australia, they moved back to the house they had bought in Alconbury Weston in 1982.

He spent the first three years of his retirement studying for a third degree – this time an MA in War Studies and International Relations at Kings College, London.  His next move was to opt for voluntary work.  He was appointed Chairman of the Cambridgeshire Branch of CPRE and held that post until the end of 2010.

His successor, Michael Monk, found Mike’s guidance and grasp of the many challenges facing the Cambridgeshire countryside invaluable when he took over the reins.  “I had spent the previous five years helping the Branch, so had a pretty good idea of what was involved. I was impressed by Mike's quiet air of authority and even more by his grasp of the issues confronting the development pressures on the County - at that time the fastest growing county in England. He was wonderful role model."

Mike is survived by Anna, his wife of 51 years, their son James who lives in the USA with his wife Laura and their three children - Charlotte, William and Thomas.